LOS ANGELES – Mayor Eric Garcetti yesterday was joined by councilmembers, environmental justice activists, and community leaders to sign a directive to phase out oil and gas drilling in the City.

“Oil drilling has always been a part of our City’s DNA, but today, we begin a new chapter: the true beginning of the end of dirty energy production in Los Angeles,” said Mayor Eric Garcetti. “The  climate crisis demands a swift end to our dependence on fossil fuels, and by shutting down our oil wells and lifting up workers, we are putting communities first, helping keep the air clean for our families, and moving closer to a clean energy future that doesn’t depend on dirty oil.” 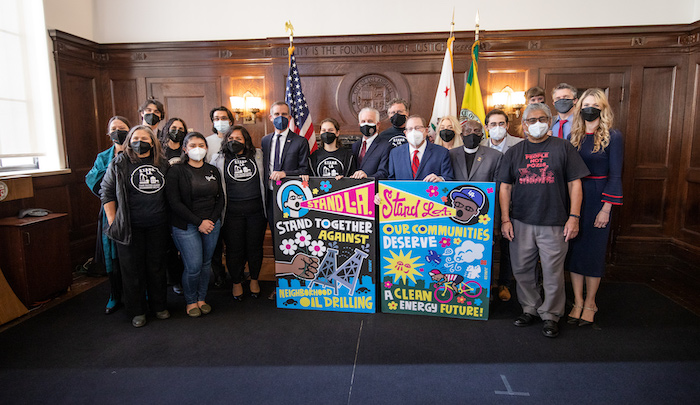 As a result of the directive passed by the City Council last week, the Department of City Planning (DCP), with the assistance of the City Attorney, will now draft an ordinance to both prohibit new oil and gas extraction in the City and amend the zoning codes to prohibit ongoing extraction activities. The Petroleum Administrator will also conduct an amortization study of drill sites, while the City will continue to lead the Just Transition Taskforce with L.A. County to deliver a just transition plan for workers.

“This moment is over a decade in the making. Thank you to Mayor Garcetti and the City Council for working with us and keeping Los Angeles in the leadership position,” said the STAND-LA Steering Committee. “Together we will end urban oil drilling once and for all and help our communities live in a safe and healthy environment.  We look forward to working with various City departments for the speedy implementation of this motion and creating the ordinance and necessary programs.”

“I have been fighting to end oil drilling in my neighborhood since I was nine years old, and it is the power of communities like mine that made this moment possible,” said Nalleli Cobo, Cofounder of People Not Pozos. “I’m thankful for the leadership of Mayor Garcetti and the City Council whose action makes way for a healthier future for all of LA.”

Since taking office, Mayor Garcetti has put Los Angeles on a path to sunset oil and gas production and better manage current production. In 2016, Mayor Garcetti reinstituted the Office of Petroleum and Natural Gas Administration and Safety for the first time in nearly three decades. The Mayor also accelerated the progress of the Clean Up Green Up operation, advanced a suite of air quality monitoring programs, and helped improve inspection protocols for industrial facilities.

Over his tenure, Mayor Garcetti has led the City to pursue the most ambitious clean energy agenda in the country. Since 2013, the share of Los Angeles’ electricity coming from renewable sources has doubled to 40% compared to just 20% back in 2013, which exceeds the State’s current target. The Mayor has taken bold steps to reduce the City’s reliance on dirty energy sources, from completely divesting from coal power by 2025, to building out the largest public EV charging network of any city in the country. L.A. has decreased greenhouse gas emissions from its power grid by 59% from 1990 to 2020 and during the Mayor’s tenure, secured its position as the #1 solar city in the U.S. for seven out of the last eight years.

Mayor Garcetti has also pushed Metro and the Los Angeles Department of Transportation to create and accelerate some of the most ambitious sustainability goals in the nation — including the commitment to fully electrify Metro’s bus fleet by 2030 and LADOT’s fleet by 2028. In response to this bold goal, LADOT placed the single largest electric bus order in American history with 155 total buses, and Metro has now ordered 145 electric buses.