Los Angeles — Roundtable of Southern California Chinese-American Organizations (RCAO) and Professors and Experts Federation (PEF) USA jointly held a forum in commemoration of the 50th anniversary of President Nixon’s visit to China, discussing the impact of this historic visit, and introducing the legacy of General Chennault and flying tigers. 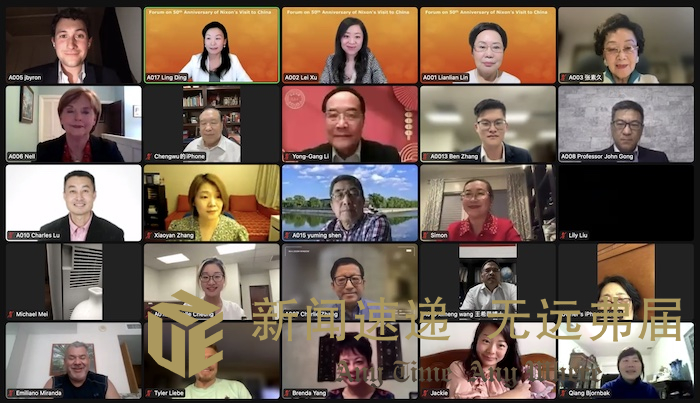 Twenty-eight Chinese organizations in Southern California joined the forum as co-organizers, and expressed their sincere appreciation of Nixon and Chennault for their contributions to the US-China relations and world peace.  The forum also explored what to do today to promote US-China friendship and cooperation.

The four keynote speakers, who came from U.S. and China with different backgrounds, included Jim Byron, president and CEO of the Richard Nixon Foundation, Nell Calloway, CEO and president of Chennault Aviation & Military Museum, Charlie Zhang, Board Director of Nixon Foundation and entrepreneur, and Dr. John Gong from University of International Business & Economics in China.

Jim Byron has been involved with the Nixon Foundation for nearly 15 years, gaining a wealth of experience in strategic planning, message development and nonprofit advancement.  He led the planning and execution of the strategic communications campaign to launch the New Nixon Library, which — combined — reached more than 100 million people.  In his speech, he looked back at President Nixon’s trip to China and discussed its significance and impact.  He also introduced a series of celebrating activities at the Nixon Library this year.

Nell Calloway, the granddaughter of General Claire Chennault, spoke the legacy of General Chennault and the flying tigers.  Chennault’s incredible life story and experience continue to be told at the Chennault Aviation and Military Museum and the Way of a Fighter’s exhibit.  Calloway has worked both nationally and internationally to remind people of the close relationship between the people of the United States and China during World War II.  She is one of the founders of the Chennault Aviation Academy, training students to follow the legacy of General Chennault.

Charles Zhang serves as board director of Nixon Foundation.  In his speech titled “While drinking don’t forget the water’s source”, he shared his inspirational life story from a humble beginning in his native Shanghai to a successful entrepreneur and well-known philanthropist in U.S.  He came to America in 1980 with twenty dollars in his pocket.  With hard work, determination, and belief in the American dream, he transcended many obstacles to achievement in and outside of business.  Zhang received an honorary doctorate degree and various prestigious awards for his contributions to local and international communities.

Dr. John Gong is Professor of economics at the University of International Business and Economics in China.  He is a prolific researcher and writer with a list of publications in leading international academic journals.  He is also a renowned op-ed columnist for several leading English newspapers and media in Asia, writing extensively on economic and political issues.  His speech is about the development of China-US economic relations.  Using statistics on trade, investment, travel and study between U.S. and China, he discussed the benefits and challenges in the economic relations between the two countries.

Sue Zhang, RCAO honorary chairwoman, and Phoebe Chen Huang, RCAO chairwoman, made welcome remarks.  They stated the purpose of the forum was to pay tribute to President Nixon and General Chennault for their great contributions in history, and inspire people to make every effort to promote a heathy relationship between US and China.  In the panel discussion, eight Chinese community leaders and youth leaders, including Song Guo, Charles Lu, Fengnian Jiang, Michelle Cheung, Ben Zhang, Sophie Zhang, Yuming Shen and Ximeng Wang, shared their personal experiences and views about Nixon’s ice-breaking visit to China and the Sino-US relations.

In her summary speech, Dr. Lianlian Lin, President of Professors and Experts Federation USA and Professor at Cal Poly Pomona, pointed out two most distinct characteristics of the forum. The distinguished keynote speakers were from different fields in U.S. and China,  and they addressed the US-China relations from different perspectives.  Secondly, the panel speakers were association leaders from different generations, including high school student, college student and entrepreneur, and young candidate for the unified school board.  Youth is the hope of the future.

The forum participants came from various countries, including US, China, Canada, Australia, New Zealand, Italy and UK, etc.  The responses from the audience were positive.  One participant commented that “It was very informative and interesting. I honestly did not know much about Nixon’s presidency, so it is very fascinating to be enlightened by all the amazing things he did”.